Got a question? New to the forum? Feel free to post your questions here.
BUTTON_POST_REPLY
14 posts

I had never used any lubricant yet, but encountered resin pockets while sawing pine yesterday. The blade got sticky and hard to pool. I poured gas oil on the saw an in the kerf with so goog results that the saw cleaned itself while sawing... I've heard about citrus based lubricants with different opinions. Has anybody ever tried this struff ? Are there different types, some to avoid ?
Thanks for your advice.

Well sorry, I wanted to say "the blade got sticky and hard to pull"...

I've never used diesel (gas oil) but instead use WD-40 for the same purpose. Old time loggers used bottles filled with kerosene that I've only seen in photos.
Top

The few times I used diesel on a saw, the saw did run a bit smoother and came out of the kerf clean. I encounter so very few pine trees though, I don't carry a lubricant on a typical day in the woods. The occasional pine allows me an opportunity for axe practice, which I never get enough of.
Top

I run into a lot of different soft woods and always carry a small squirt bottle of diesel. WD-40 works fine, but I don't like to carry an aerosol can around. A little 4oz squirt bottle of lube really helps the sawing go faster and smoother, and keeps your saw clean. I recommend it.
I've used citrus stuff, it works fine but costs about 10x more. Also, most citrus solvents are just petroleates with citrus aroma added, so check the label.
Top

We always take some lubricate/solvent. I've used kerosene but mostly WD40 because it is handy.

Also have used Zep degreaser and it seems to work fine. The Zep is cheaper then pure citrus solvent and has citrus and other natural solvents in it. It does not promote rust and smells good. 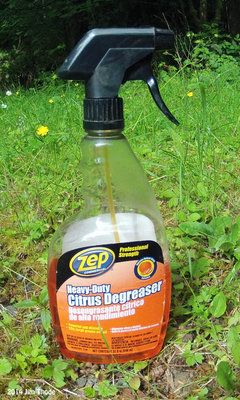 Thank you very much for sharing your point of view. I'm a bit suspicious about citrus based solvents I find here, most of them seem to contain water. So I will keep diesel as it is cheap, easily available, and because I admit I like the smell...

I'm curious about the use of lubricants. We don't seem to have a tradition of using them here in the UK, possibly because, historically, we had no significant numbers of conifers to fell until the middle of the twentieth century.

I get the impression that they are more a solvent than a lubricant (ie, used for dissolving resins) and there wouldn't be much advantage in using them on hardwoods. Would that be right? Or do people find them useful in most types of timber?
Top

I only use lubricant when needed to cut pitch on conifer trees. Around here Douglas Fir can be pitchy. I never have needed any on hardwood trees, cedar or hemlock that I mostly cut for firewood.

Back in the day when all the falling was done with crosscuts I have been told that the biggest problem was hitting pitch pockets in fir trees. Sometimes the pitch pockets could be quite large and flood the saw with pitch. It could be really pain.

Jim, around here folks are using a mix of diesel, WD-40 and bar oil, mostly in dead spruce, it seems to be working OK, what do you think about that. I think the mix is 1/2 diesel, 1/4 WD-40 and 1/4 bar oil, but will have to check on that part. I've used it some, think it works, but haven't used it enough to say for sure one way or the other. The local trail crews are using it, say a small bottle of it goes a long way for them. I have used citrus oil, too, and liked it.

Side note Jim: we've been going through a spruce beetle-kill deal here for about 6 or 7 years, have been busy keeping trails open, including our trail crews, volunteers and Back Country Horsemen folks (thanks, Jim, for what you do for BCH). We've been running into varying numbers of downed trees per mile on the average sections of trail in this area, ranging from something like ten to fifty trees per mile. On some trails it's been higher, though, and on one trail we have literally been seeing 1000 to 2000 trees per mile. These are predominantly the older trees that died across the landscape, with most of the younger ones surviving, and the tree sizes range from smaller to 42" dbh. We think we're starting to see the light at the end of the tunnel as far as new trees dropping, looking forward to that.
John
Top
BUTTON_POST_REPLY
14 posts