Got a question? New to the forum? Feel free to post your questions here.
BUTTON_POST_REPLY
5 posts • Page 1 of 1

Crosscut Saw Company sells a different design of Western Style Handles - item #432 - for $54.95 per pair.
I asked if they had a closeup photograph or shop drawings of the handles that they would share, but no joy!
Does anyone on this forum have comments about the handles, and especially a good photograph?
Top

I would advise against them - get the Flicker Forge handles for $90.

Two of us bought these a few years ago and found that they twisted around and were generally unacceptable despite the claims. I ended up using the soft aluminum to shape a replacement block for another handle. They have an extender that simply doesn't work the way it should.

To get the new handles from the Crosscut Saw Co. more to my liking I did the following:

1. Took them apart and removed the black lock nuts from the long threaded pin bolt.

2. Slightly deepened the narrow groove in the aluminum piece that the saw blade seats in and cut a similar groove at right angles.

3. Cut a large U on the back of the aluminum piece so that a wooden handed nests in it. Slip over the threaded bolt

4. Drilled a hole in the wooden handle and slipped it over the threaded bolt

5. Bent the large washer so it fits around the wooden handle and slipped over the threaded bolt.

6. Place a 1/2 wing nut on the threaded bolt and tightened onto the saw. 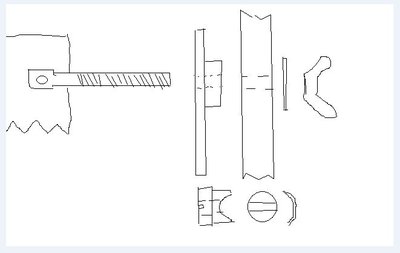 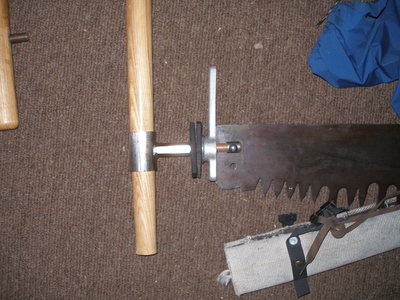 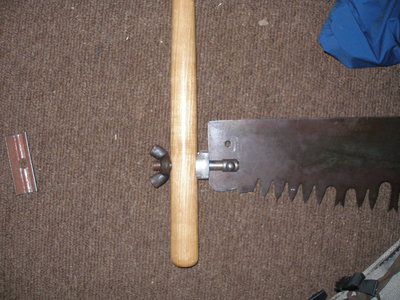 We bought 2 pair for our saws. Every body liked them for awhile until they got crisp on having to spin 3 parts to remove and add them from the saw.
I went to the hardware store and bought a 1 and 1/2 inch pipe nipple and 2 wingnuts to fit the thru bolts.
Sliced the pipe nipple in 4ths, Ripped a slot on two of them, drilled holes and radiused them as the eastern handles on the MTDC site.
Salvaged tool handles then added eastern or climax style. I'm really proud of the tool marks.
we had these longer then our Flicker Forge handles. It seams these thru bolts are more corrosion resistant. 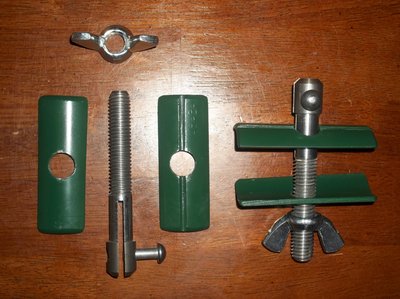 And they're green! Nice job.
Top