I've been reading this forum for near a year

Got a question? New to the forum? Feel free to post your questions here.
BUTTON_POST_REPLY
9 posts • Page 1 of 1

I've been reading this forum for near a year

and finally joined - thanks. After 23 years of volunteer trail work I got USF certified for crosscut last spring. I fell in love. Anyway, I was telling a buddy of mine about sawyering and I'll be danged if he didn't give me an old saw that was hanging outside of his barn for 40+ years - I called it "Gimmee." I put a ton of time cleaning it up and (with places like this) teaching myself how to file. I can't say it was a decent job, but actually cuts like a beast and I like it better than the restored Disston lance tooth that I purchased.

Here's the deal. I cannot find the tooth pattern on any references (it has full gullets between all cutters and rakers). For one pass of rust and pitting removal, in just the right light, I could make out "Richardsons" not "Richardsons Bros." Tried to save what was left but no dice.

My intent was to have a good working tool and learn, not have a collector's item so that was accomplished. I was wondering IF anyone had seen/heard of this? 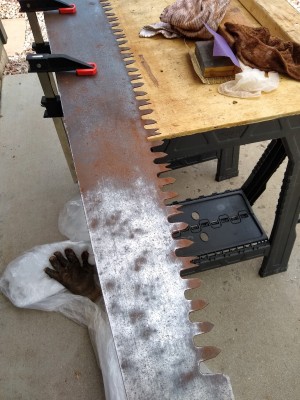 Welcome to the forum!
You have done a nice job on your saw!
I have not seen the Richardson name before.
Gary
Top

Thanks Trailsawyer. Just this week I was given another saw. It's a one man Disston, 42 inches, medallion indicates manufacture 1917 or prior (if the Disstonion Institute is to be trusted). I thought it was filed way down and badly until I inspected it closely. But the asymmetry and tooth size look original. Perhaps an old saw for rough framing. I'll probably file it, repair the handle and give to my ten year old granddaughter who came out to help cut last year. She's proud, has her own hand axe that her dad has taught her how to use and be safe with. 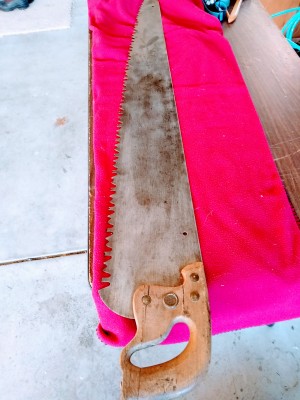 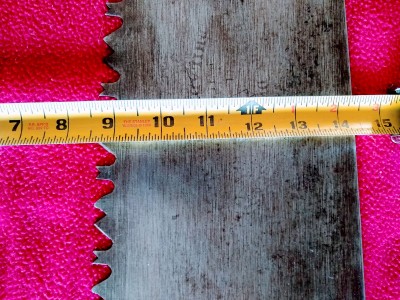 Another nice find!
Your one man saw looks like the Disston No. 1 Extra Champion in the 1919 catalog?
(the 1919 catalog is the undated one in the list of Vintage Catalogs, Disston)
Gary
Top

I found it in the catalog and it looks like the one - down to the 4 screws for the handle instead of three. Once I saw the picture, I realized that it had been WAY filed down and not very good. Spent yesterday afternoon deepening gullets and re-shaping the teeth. Didn't do much on cleaning since there was almost no rust and no pitting.

And I didn't find it, it found me.
Top

Your "Richardson" saw may have had a lot of filings. No telling what previous filers did to the gullets and rakers (which look a bit odd). Joint it and point it, then see how it cuts. Does it have any particular grind to the blade?

I've restored many "worked over" saws and they mostly ended up cutting pretty well. Collector's items are more likely to be NOS blades with sharp, clean etchings.
Top

Yes, the big saw was in bad shape. It had been filed down to about an inch of teeth left. SO, I figured 1) I got the saw free 2) the shape it was in precluded it likely ever being a collector item, the worst that happens is I spend a lot of my time just for learning sake. I did spend a LOT of time and I learned a fair amount. After clean up I:

Hammered out a bow and a number of dimples.

Jointed it and filed the rakers. There were several places where one tooth was touched in the jointing and 3 or 4 cutters away there would be a flat half the width of the tooth. I didn't trust that had filed to the arc so I jointed it again. This time it was more like I had read about - all the teeth just lightly touched. Then I deepened the gullets by an inch or so.

I took it out cutting and it did ok, but when I got it home I re-shaped and slightly swaged the rakers to 0.18" and increased the set to 0.012"

Took it out twice after that and I like it, pulls smooth, cuts fast and has at least a semblance of noodles. Overall it cuts pretty good and with the weight of the saw I think I could go even wider with the set, maybe experiment with the rakers set deeper. I'm not fooling myself that it's as good as an experienced filer would do, but hey, learning.

As far as a "particular grind" I don't know, although I like to joke that after all the rust and pitting I took out it might be considered tapered now. I haven't bothered to measure it - mostly because I don't have any calipers. This is a total newbie low investment experiment.
Top

Easiest way to check for grind is to hang the saw and hold two straight edges, paint sticks, or anything flatland narrow, on either side of the blade. A tapered saw will bring the straight edges close together at the spine and further apart at the belly. On a non-tapered saw, the gap will be the same on both sides. Subtle differences in the gap when measured across the length of the saw will reveal straight taper vs. crescent grind.
Top

I cannot detect taper in either axis.
Top
BUTTON_POST_REPLY
9 posts • Page 1 of 1