Post here if you are trying to identify a saw, or want to discuss specific features of saws that can be used for identification.
BUTTON_POST_REPLY
8 posts • Page 1 of 1

What could this one be? Lots of end teeths... 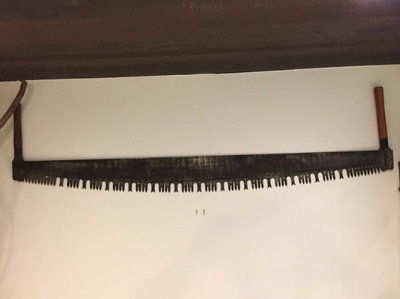 Looks like it may be in good enough shape to see a logo etch if you look closely.

Other then that just looking in old catalogs a guess would be an Atkins numbers 4, 55 or 225, they all seem to be the same shape with just the steel being different. In Simonds number 22 and 324 look similar with 22 being a little deeper then the 324.

The number of starter teeth will vary even in the same model/brand depending on the length. They just added what ever it took to fill in the space and make a saw of the nominal length.

It looks like my Canadian #22. Picture was not clear enough to see if you have three handle holes but it kinda looked that way?
The profile of the end teeth (full set of end perforated cutters joined and then a set of two perforated not connected) is the same.
As Jim noted you should be able to find the etch on this saw. Please do it wisely so you don't remove the etch. 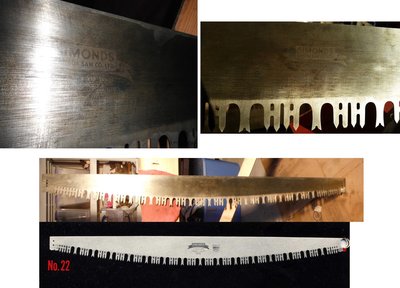 I'll go and have a look in person tomorrow but there's no rust so that's definitely a plus.

About being smart, what is the recommended way to clearn/restore a blade like this. I see so many links with different solutions that I'm not too sure where to start to be honest. Thanks
Top

The western folks like using pumice stones, but you're not likely to find those out east. I use either electrolysis or a sanding block with 100g or 220g sandpaper (depending on rust). There are plenty of electrolysis posts on this site that describe the process. When sanding, I lubricate the saw with WD-40 to float off the crud and sand in the long direction only, taking care not to round off the cutter points.
Top

I'm with PATCsawyer on this. I've done electrolysis and pumice and sandpaper and find that the easiest and quickest - and with minimal damage - is fine sandpaper (220). Unlike PATCsawyer, I flood the saw with water while sanding to flush out the gunk then dry off the saw afterwards. I use a nine-inch long sanding block parallel to the length of the saw and find that it also helps locate high and low spots on the saw.

For heavily rusted and pitted saws, I use a BBQ grill cleaning stone. Again, flooding with water flushes out the rusty junk and gets the surface cleaned up. 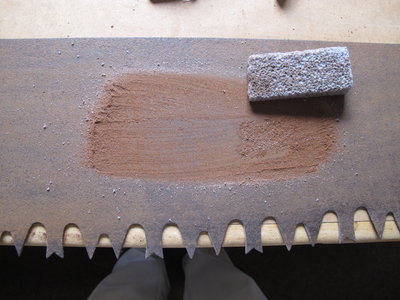 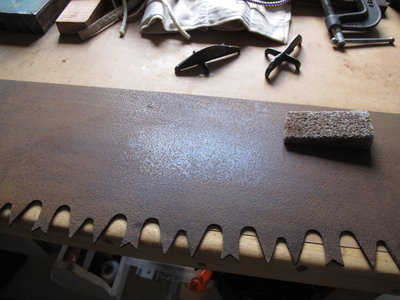 Which method is less damaging to the etch?
Top

I learned from Dolly and stick with her methods. I place the saw at a slight angle and trickle water over it while lightly polishing the etch area using a "Dolly Stone" and a grille brick for the rest of the saw. Dolly was nice enough to give me a couple natural pumice stones while attending her sharpening class. The natural stones are less aggressive than the grille brick which can take off the etch. I can run the grille brick along the teeth with no damaging effect (the brick disappears faster of course). If you use the grille brick against the grind grain, such as tip to tail of the tooth, you will get a shiny spot that stands out later so I only follow the grind pattern. I order 3M grille bricks on Ebay but you can also get them at Costco business stores at a better price.

I also do electrolysis depending on the level of rust but I sill finish those treated saws in the same final cleanup manner. 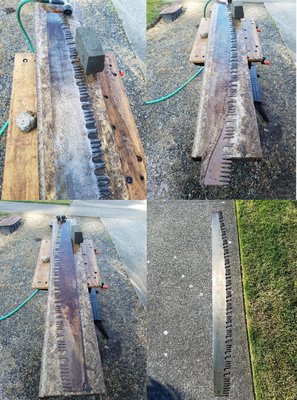