Post here if you are trying to identify a saw, or want to discuss specific features of saws that can be used for identification.
BUTTON_POST_REPLY
5 posts • Page 1 of 1

Looking for information on this saw. It was found on a fire in Idaho. It looks like a Canadian version because of the three holes. 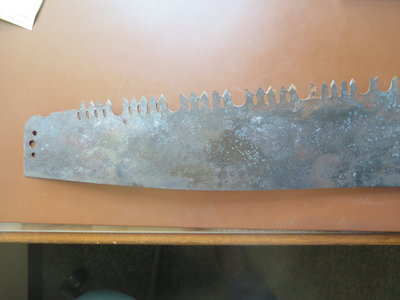 An interesting tooth pattern. I see it looks like the one way rakers are not swaged. Based on David R.'s one way raker saw that may be a good idea not to swage the rakers. David made a small saw with hooked/swaged shaped rakers and it did not seem to work. The rakers would just dig in. In either case it is oblivious that the one way rakers did not become very popular. However I have seen vintage filing instructions that recommended putting some lead in the last few rakers and that makes some sense for larger logs where the rakers would tend to kick cuttings out of the cut rather then into the center of the log.

This is David's saw:

I think David also had a one way raker vintage saw but I don't know the brand/model.

Starling_Saw wroteCOLONLooking for information on this saw. It was found on a fire in Idaho. It looks like a Canadian version because of the three holes.

What does the center of the saw look like?

Based on the first photo, the saw looks a lot like a Disston Toledo.