Post here if you are trying to identify a saw, or want to discuss specific features of saws that can be used for identification.
BUTTON_POST_REPLY
8 posts • Page 1 of 1

I am reconditioning several saw right now (newbie enthusiasm!). One was my grandfather's; I have been toting it around for decades. He used it for firewood making in Wisconsin in the early 1900's. It is a perforated lance tooth design, crescent ground and 66" long. The only identifying mark is a "249" stamped into each end; maybe a company inventory number? The only damage is one cutter tooth snapped off at half-height.

The other I picked up locally here in western NY state at an antique/junk shop; $65 including two usable loop style handles. It is also crescent ground, champion pattern and 66" long. Damage is one raker tip snapped off.

Any ideas of maker on these saws? I'm hoping the limited damage on each one won't be a problem for use; I also picked up a couple of heavily rusted/pitted saws very cheaply for filing practice. 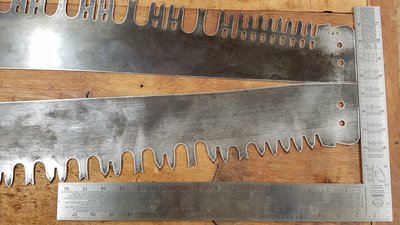 
Looks like they both have sway backs so that eliminates some. The perforated looks like a 133 and the other looks like a 315. The number of starter teeth will vary depending on the length of saw.

Thanks for the replies; as a newbie it's a learning curve to spot criteria for ID. Score one for Jim_Thode and one for sunnergeo; the perforated (Grandpa's saw) is a 133 and the other a 113. The catalog was a great help for using it's tables of specs. Also I see the residue of red paint on one end of the 113, helping to confirm it as a Simonds. Pictured are the snapped raker on the 113 and the snapped cutter on the 113, as well as the residual red on the 113. 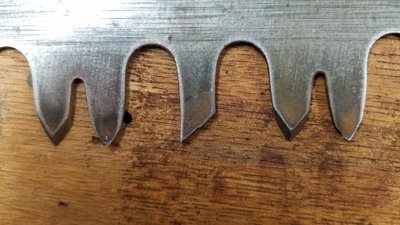 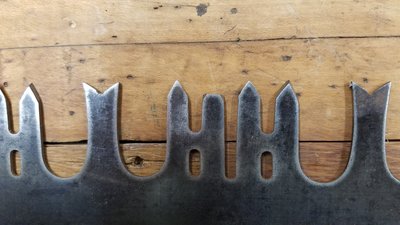 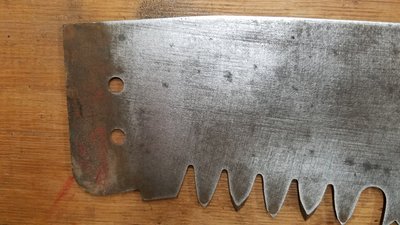 I hadn't noted that the perforated lance tooth had a swayed back so will change my call on a Simonds No. 22 to a No. 133, per Jim's call. The real puzzle could be the number of teeth on the end. Older catalogs show saws with more cutter teeth - 10 - and have that gap separating two teeth from those closest to the end. Seeing the etch might help, the older Simonds had a bigger and fancier S versus those shown in the 1953 catalog.

I'll stick with calling the tuttle tooth a No. 113. It will be easy to tell the difference by looking at the entire saw, a No. 315 would be narrower in the middle than the No. 113, 4 1/2 inches versus 5 1/2 inches. Brad, your photo of the red end will help you find the etch. With the teeth down and the red paint on the right, the etch will be in the middle of the saw (Oops, just re-read your post and see that you already did that).

Just so you know, I use a No. 13 and a No. 113 in our trail work. Both have broken teeth but have managed to cut out hundreds of logs from various locales.
Top

I remember that Tuttle tooth saw from its eBay auction which included a pic of the broken raker. The wider belly confirms a #113. Note that the saw was tempered for frozen timber. I have a couple of those saws and they are indeed hard. Better to put a little propane on them if you intend to swage the rakers. John Starling has a nice YT video of forge welding tips on saws with a MIG welder and high speed steel wire. I've been using that technique with success on some damaged saws. Not that hard to do.
Top

Wow, had no idea that was an Ebay saw; picked it up in a local NY antique mart. Good to know re: the hardness.

On closer inspection, I take back what I said about eBay. I saw the broken raker and it looked just like a crosscut I saw recently on eBay (below). Just one more caution on the tempering of your saw. 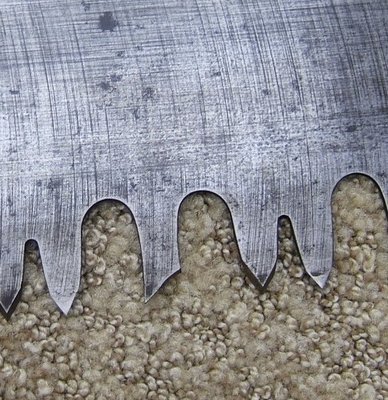