Got a trail project or crosscut saw training or certification course you want to advertise? Post it here!
BUTTON_POST_REPLY
2 posts • Page 1 of 1

One-day class to be held at Mike Siemsen's School of Wood, north of Minneapolis.

Hands on class will cover everything needed to sharpen and tune up your saw, from cleaning and straightening through jointing, filing and setting both cutters and rakers.

Bring your saw(s) or use one of ours. Tools needed to sharpen your saw available or we can make some on the spot. Check out past posts regarding this class from 2014 and 2016.

Here is the link: http://schoolofwood.com/classes
Top

We had a good class with six industrious filers working on five saws. Saws ranged from an untouched Atkins Economy with a protective tarry material still in place to vintage Disstons that had been sharpened a number of times based on the shallow gullets. Most of the saws were D-handles of the sort that would be used to cut firewood around the homestead.

With each saw, we started a cut in a birch log and noted things such as: fibers not cut, snags during a pass, lack of curls or shavings or generally didn't seem to cut very well. After assessing and straighten saws that needed it, we jointed the saws and found that a couple of them had rakers higher than the cutters and another had rakers and cutters at the same height.

With plenty of filing we gummed out the gullets, lowered the rakers to .012" below the cutters and shaped the rakers and cutters. Setting followed with half the saws with too much set (up to .045") and others with sets differing along the length of the saw. After getting the set close to .012", we did final filing on the cutters and ran the sharpened saws through the birch log. What a difference! Smooth cuts, no fibers, clean passes for all the saws and a satisfying number of noodles. 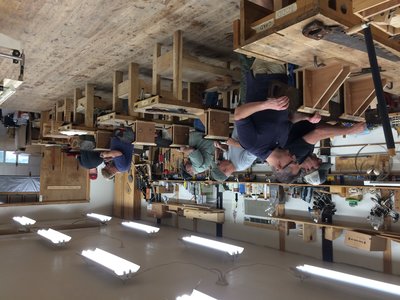