Got a trail project or crosscut saw training or certification course you want to advertise? Post it here!
BUTTON_POST_REPLY
19 posts

Dale, I sure would like some extreme closeups of your rakers and filed teeth. I'm having troubles getting the right angle to the rakers and your pic intrigues me.

I did not swage the rakers, as they are extremely hard, I will post a pic after I try the saw out.
Top

Here is a close up, or as good as my cell phone camera can do. Unswaged raker.
I don't have the filing perfected yet. 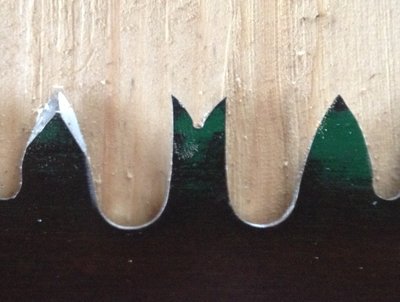 I went out and cut up some firewood, it cuts good, but needs a bit more set for green tamarack. 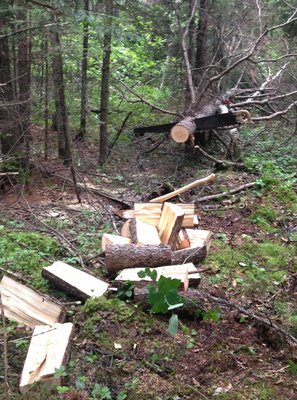 Dale Torma wroteCOLONI went out and cut up some firewood, it cuts good, but needs a bit more set for green tamarack.
image.jpg

Good job on cutting fire wood. How much set do you have? For a saw with no or very little taper I'd suggest about 0.020" of set.

I think the 221's have 3 gauges of taper, I have the set at 9 thousandths or so and it binds just a bit in the tamarack. It does not seem so tight in the black spruce.
Probably due to the rakers, it does not spit noodles, they look like noodles coming out, but they break into chips in the air. It cuts pretty fast considering it is missing a few tooth tips. A couple tips were missing and a couple more came off when filing, you could see tiny cracks 1/8 inch down from the tips. I'll have to joint it down that far sometime and try it again. Perhaps the last filer cracked tips when setting. The teeth and rakers are pretty hard and we tried cold swaging a couple rakers and they would not move. Its not an easy saw to work on. I guess I'm learning, but it can be frustrating too.
Top

We had another good saw class last Saturday, thanks to Mike Siemsen and Dale Torma. More had originally signed up or expressed interest but it came down to a small but enthusiastic few. In addition to running through our collection of Finnish jokes and stories about the Upper Peninsula (the UP) of Michigan, we seemed to have picked the most challenging saws possible to work on. We had saws that would need a light jointing followed by some pointing the cutters and refining the rakers but that would have been too easy!

Instead we picked a couple of questionable saws: both were 4-ft D-handles. Dale's was painted green and had a dried out handle while mine had a pipe welded on as a helper handle and four mismatched bolts holding on the handle. As Dale mentioned, we got the paint off and ground off the welds holding on the pipe and went to work. After a little clean up, Dale had a Simonds 221 and I had an Atkins 390. Pretty good saws!

We'll likely post more info as we continue our revival. Since the class, we are deepening our gullets and are finding that the Simonds steel is really hard to work but the Atkins is a little more forgiving. 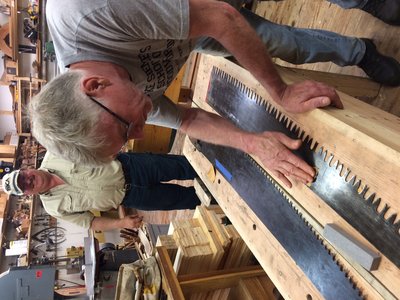 Mike looking for an etch

The Atkins 390 is finished and works well. We scribed depths for three levels on the saw and then cut to those with the die grinder: one cut to middle of the raker, a couple of cuts to the valley between the cutters and about three cuts to deepen the gullet on either side of the rakers. It saved a ton of filing! 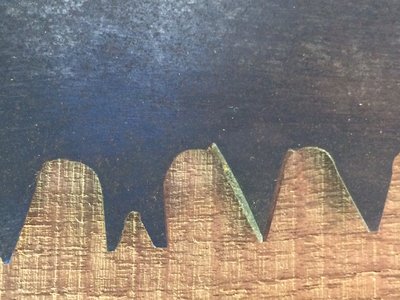 I filed out the raker with a large triangular file and mucked out the raker gullets and the valley between the cutters with chain saw files and a crosscut saw file. I left the raker closest to the toe alone to compare before and after. 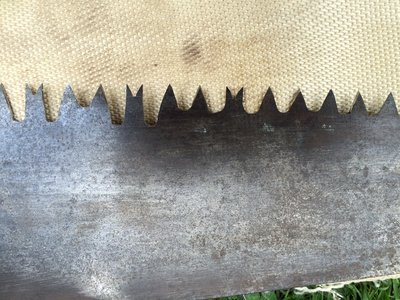 I swayged the rakers using a technique that Chiricahua Zac shared with me, hammer then measure to get all the raker teeth down .008. I then filed those to the 75 degree chisel using an Anderson gauge to .012 in the way that PATCsawyer posted.

I filed the cutters and continued shaping the teeth and gullets as I was doing it. The gullets are not identical but are 'close enough.' 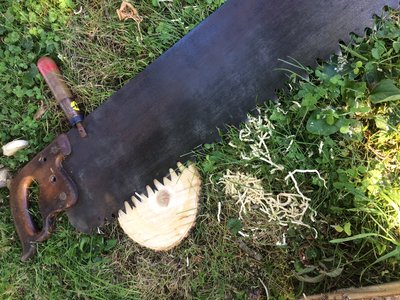 For cuts on maple and birch, results are good. Cuts fast with little effort and kicks out some nice noodles.
Top

I know you spent hours filing and working that saw, getting it in great cutting condition.
I think it was well worth the time. Makes a guy appreciate the easy ones.

I have also done some material removal with a die grinder to save a ton of time and $$$ on files. It doesn't seem to hurt the saw at all if you don't let things heat up much. I think some of the power tool fear around here is due to results after overheating the saw or teeth.
Top
BUTTON_POST_REPLY
19 posts