Saw-sharpening course in England, May 6 2016

Got a trail project or crosscut saw training or certification course you want to advertise? Post it here!
BUTTON_POST_REPLY
4 posts • Page 1 of 1

Saw-sharpening course in England, May 6 2016

It is now official - Sawman leads and I'll assist him at one-day saw sharpening workshop Fri 6 May 2016 at the Bodgers Ball, Tyntesfield, near Bristol England.

So if you are in these parts - or you fancy joining the course and have £60 available, find out more info here: http://www.bodgersball.org.uk/2016/courses.html

It's much more than likely that saws will be sharpened on other days too...

Saw vises made up and ready to go. 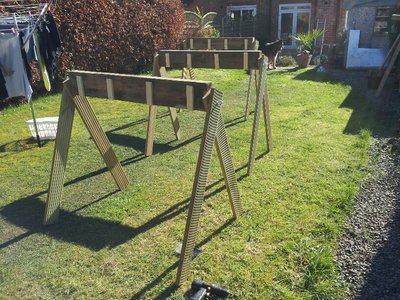 They are Dolly hybrids as they were made up from oak beams that where holding up the front of my house. 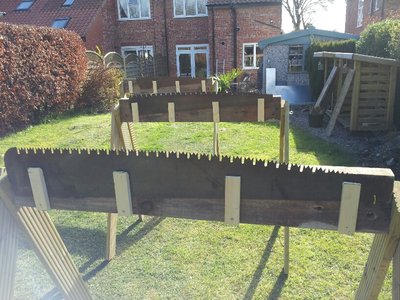 Unable to make the original Dolly vise (if your reading this Dolly thanks again for the plans to your vise. Spelt correctly this time. ) Just didn't have enough beams. 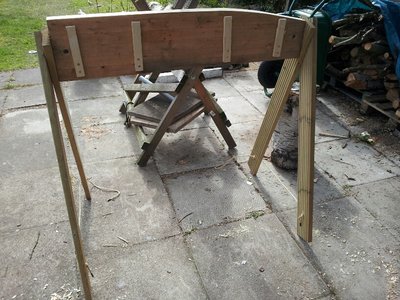 Even though the group of 3 have no curve on them this is because the beam is not large enough to take the belly of the saw and a curve.The saws look to high on the photos, but can be pushed down to the screw making it perfectly placed for filing However the saw sits very well and just needs to be moved for the curve. Test filing was more than satisfactory. See you all on the 6th. Looking forward to this event very much. Cheers Duncan.
Top

I would just like to say to all the men and women of this forum, a personal very big thank you for all the help and encouragement to have now had our first crosscut saw course in the U.K. as if it hadn't been for you guys it would have never happened. After 3 years of slog to the point that Gavin and myself thought that nothing was going to get of the ground, the next thing I find myself in a marque near Bristol teaching how to restore a crosscut. We should have had 4 in the group,but one was held up in London and was unable to attend. 2 of the gentlemen came with their brand new crosscuts from Sheffield at £100+ a time. I have heard of these saws and was keeping an open mind on them and gave them a go. A lot of words were going through my mind when I tried them and excellent was not one of them. Truly awful.One wasn't even sharpened. I had arranged with a charity that comes to sell old tools at the event to go through their saws. I chose 2, both taper ground a Spear and Jackson and a Tyzac both from the 1800's Both saws went for £10 each. They were cleaned (tooth area only) filed and set under my direction and when tested you should have seen the guys faces, the biggest smiles you have seen in a long time. At last they had a saw that worked. We could have sold the course many times over with the amount interest we had and had deposits paid for the next course on raker toothed saws that I will be tutoring at Gavins place in October. This looks as if this will become a yearly event so I feel we are now standing on our feet and are able to promote the the crosscuts. So a big thank you again, it did make all the difference and your time has now paid off. Duncan
Top

... and many thanks to Sawman above. For without Duncan, this would NOT have happened.
Pics and videos to follow