When checking for the proper tension in a saw, the first thing you have to make sure that the saw plate is level. The saw shown, had a small bend in the back, which I seen when hanging and checking with a long straight edge. During the examination I found that there were no cross lumps, but it had a ridge lengthwise. I check for the ridge with a back light and straight edge and determine where and how it lies in the saw plate.
I don’t want to change the tension in saw, so I put a piece of rubber mat down on anvil and hammer at chalk line lightly to level and continuously check with straight edge until it shows that it hangs straight. 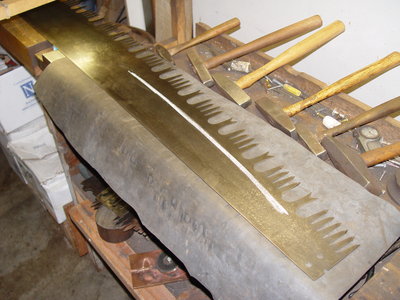 This saw was a new Simonds 503 that had never been filed or set, and it was one that would have been bent right away if I hadn’t checked it. 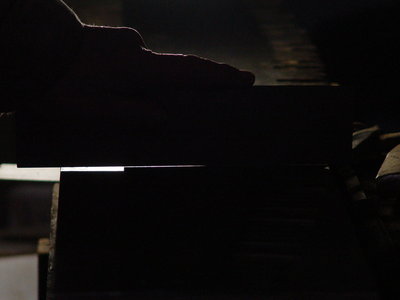 Straight edge and back light showing ridge in saw 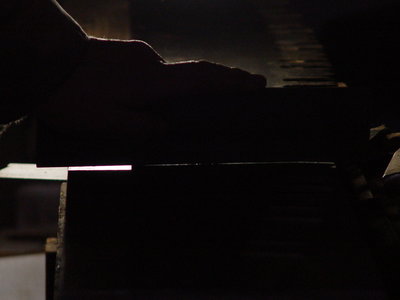 Straight edge and back light showing ridge in saw, by rocking straight edge across saw, you determine length of ridge 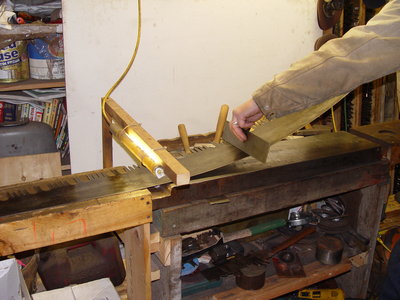 After I feel that it is straight, I place the saw on bench and lift one end a couple feet from bench while sliding the straight edge up and down the saw to see where the tension lays. 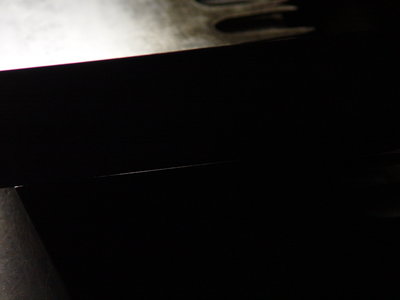 Using the light behind the straight edge you can see if any light shines under the straight edge. I there is any tension in saw, it will deform down while pressing lightly on straight edge. In a 84” Simonds 503, I like to see light that would equal to the radius of a 60 foot circle gauge. If there is too much it would pop back and forth like a bottle or jar lid. If there is no light in center and light on the edges only, the saw will flop loosely and would be very hard to saw with.

If the saw needs tension in body, determine where it is needed and use the long side of hammer, match the face, so the hammer blows are lengthwise. You need to hammer hard on anvil in even solid blows. You are stretching the saw body lengthwise, making it longer in length. Turn saw over and strike the saw in the same places from the opposite side with the other face so that the long side of hammer is now going across the saw. Check for levelness and hammer lightly if the plate in deformed to make flat again. And check again for tension. If it still needs more tension, you make your hammer blows in between the places you’ve already hammered. If still more is needed make another row of hammer blows to either side of the first, in a checkerboard fashion. It is a back and forth process, checking tension and levelness.
Try this on an older saw that you might want to hang on the garden shed first. As it takes some time learning the process. I’ve worked with filers that have hammered for months and suddenly the light comes on after a time in seeing and feeling when the saw plate is right. 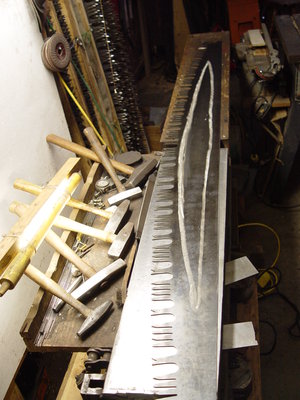 The area inside of chalk outline should have some light showing under your straight edge when checking for tension. 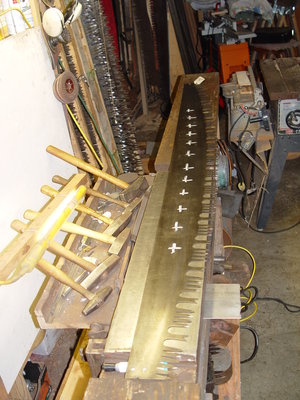 The area you want to start hammering in body of saw. 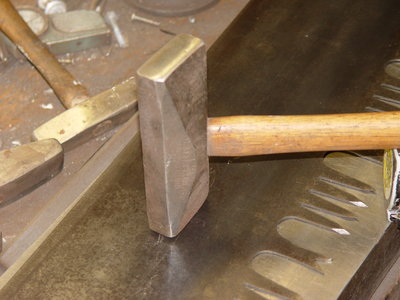 This hammer is an Atkins 3 1/2 twist face

Those are some great examples and photos! A couple questions though:

What is the thickness of your rubber sheet? I have used thin cardboard and sheets of paper beneath my saws, but am cautious about making that underlay too thick for fear that I'll over-hammer the blade.

Also, given that better saws are ground thinner toward their spines, how do you accommodate that changing thickness of the steel when hammering on your anvil?
Top

The rubber sheet is 45mil rubber from left over fish pond liner. I also use 1/16" - 1/8" thick nylon reinforced belting which I buy from an industrial supply shop. It keeps its shape better when hammering day after day, but it's around $40 per square foot. The pond liner is a fraction of the cost for general use. The Rubber is for hammering lumps and bends only, and you have to keep checking opposite side to make sure you're not hammering through.
As for the change in thickness of the saw plate when hammering tension there is no cushion on the anvil, and you can get the feel of the steel after awhile, When the saws where made in the factory, they were tensioned before the final grind of the plate. they were also more than likely rolled. When I have a saw plate that needs a lot of tension work I will usally roll it, as it is more pleasent to the eye.
Top

Thanks for posting this. I do have a question, what is rolling the saw? I've never heard that term before.
Top

Wow, that takes me back. I used to work at a factory that made fireplaces. We'd put steel sheets between these big rollers and run the blanks through them to achieve a cone-shaped finished product. If we didn't get the bend dimension right they would come out looking like clock springs and we couldn't unroll them. Not the thing you wanted to get your finger caught in...
Top

The stretcher rolls that are in picture is set up for rolling round saws. there are simular rolls set up for bandsaws which have movable rolls and support the saw on at least one side. The rolls are convex and by turning the lever/screw on top, you place different pressures on the saw steel. The rolls are driven and draw the steel thru the rolls. You don't want to get any parts of youself in the rolls. These tools I use daily when working with the industral saws, Bands and Circular saws. 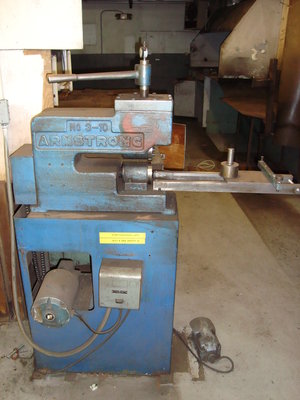 So I just got an old 4lb Disston cross pein hammer, but the faces are a little worse for their wear. If I take it to someone to get cleaned up, what kind of face do these hammers want to have? Flat ground, a little convex? I think this one's ok to start using now, especially since I'll start by practicing on 2 pretty worn D-handle American Pattern saws, but I want to know how far I am from a decent hammer.

I just realized in the earlier post that Starling sets the teeth on that forklift anvil, too. Is that a pain to keep checking with the spider???
Top

A cross pein hammer would have a convex shape, and when struck on steel it would leave an oval shaped mark matching the shape of the hammer face. When I reface a saw hammer I will use a belt sander and place the face of hammer between the wheel and the platen. This way the sandpaper will depress away from the hammer face and allow the face to get a smooth convex shape. You need to move it back and forth both ways, long and short. Test it on a piece of saw steel with a light coating of oil and it will leave a mark matching the shape of the face. I would guess that a four pounder would leave a mark of ½” to ¾” wide and 7/8” to an inch in length. Make the face as smooth as you can and relieve the edges so they don’t cut the steel if you don’t have a solid straight blow. I’ll try and get some pictures posted of my process.
When I set cutter teeth on my anvil, I’ll hammer a couple sets of teeth and turn saw up and measure them, then continue a couple sets again and measure so as to keep close to where I want them. Turn the saw over and set the opposite side same way. After a couple hundred teeth you can get pretty close, within 2 to 3 thousands. I then place the saw in my vice and lightly joint the cutters to remove any burrs on the tips with an Atkins combination jointer, and fine tune the set with a spider, hammer and horn anvil. When jointing, place the file in the jointer at a slight angle, 3 to 5 degrees so as to keep the proper angle of the cutter teeth. 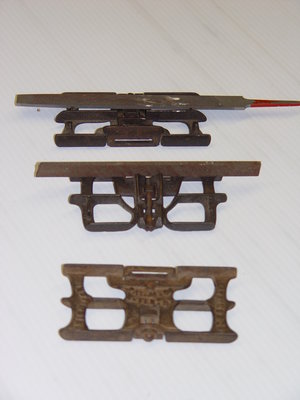 First Thing I do when assessing the condition of a saw, is hang the saw by my index finger and just eyeball down the back of the saw to see how straight it hangs. I then determine where the kink is and mark the general area with chalk or pinch it and hold the area when laying the high side up on my anvil. My anvil is 8” wide and about 32” in length 3” in thickness, with supporting wood tables on either side of the anvil. I have a small trouble light I use as a back light; about 6 inches above the anvil to the back for checking across the saw, and it also can swing 90 degrees over the anvil to check the saw length-wise also. Turn your overhead lights off or down so the room is dark. You can then see any light shining under the straight edge, which will show you the hollow or dished areas of the saw plate. When you find an area that is high, you can scuff your straight edge across the saw to make a light scuff mark. That will be the areas that you want to hammer. Use the hammer face that aligns with the direction of the ridge or kink of the scuff mark. Normally it will be cross lumps or ridges from bending the saw from someone pushing the saw to the side when it binds while sawing. Turn the back light 90 degrees and check the area for ridges that run the length of the saw. The ridges that you find are from when the saw gets pinched as the log falls away from the other piece and it pinches the saw while still in the cut. Or from it being stuck in the cut and pulling it forcibly from the cut while being pinched. Just like a gift package ribbon that you curl with a scissors, the saw will also curl when pulling the saw from a bind in a log.
John 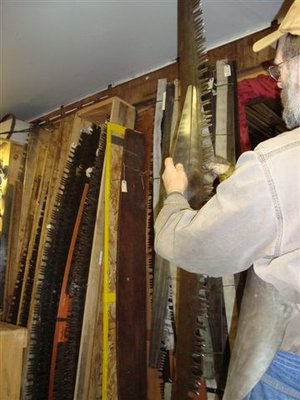 While hanging the saw, check with two opposing straight edges to find any kinks and lumps 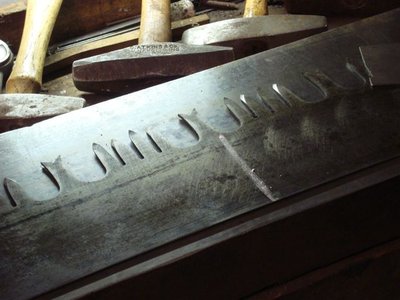 Mark the areas you find with chalk 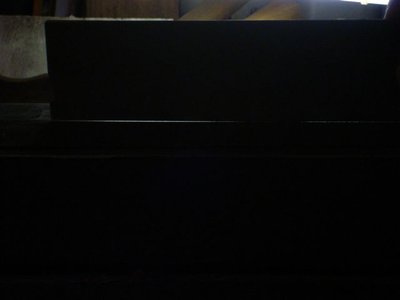 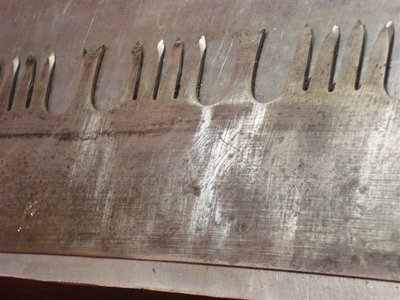 By scuffing the saw plate with the straight edge, you will see the high areas that will need to be hammered