Having taken classes from Dolly and Warren, I know there's different opinions out there about the order in which filing steps are taken. I'm still trying to find what gives me the best results. I wonder what other filers are doing and why they are doing it. Here's the order I used on the last saw I filed.

1. Clean and Straighten.
2. Gum out the gullets.
3. Joint
4. Shape the rakers.
5. Set the cutters.
The way Warren teaches it, you do the setting last. It seems like that would change the finished ratio of cutter height to raker height, but his saws cut great and maybe he's tweaked his numbers to accommodate it. But anyways, the last saw I tried setting first.
6. Point the cutters.
7. Swage the rakers.
In many sawyers' opinion, the rakers are the most important thing in deciding whether a saw will cut well or not. I worked them last to avoid damaging finished rakers in other steps. I'm trying to recall if Dolly swages the rakers earlier on and just finishes them last, or does it all in the end. I'll have to think on that.
8.Clean the bottom of the rakers with an Anderson gauge and triangular file (thanks to PATCSawyer for the technique)
9.Finish the top of the rakers with an Anderson gauge.
Josh
Top

Surely lots of opinions to follow. As for me,

1. Clean and straighten.
2. Gum out gullets and space between teeth. Consider lowering gullets and lengthening teeth if stubby.
2a. Look for impact fractures and pitting on the now clean teeth (might effect how I joint the saw).
3. Joint.
4. Shape the rakers, burying my taper file to make a deep V. If hard, torch first.
5. Swage rakers to the pin.
6. File rakers to final height.
7. FIle flat side of rakers to remove swage burr. All raker filing now done.
8. Point teeth, filing toward the tip (some file into the tip). I rough file all teeth first, then finish file.
8a. Hone the burr off the back of each tooth with a fine stone or diamond strop while finish filing.
9. Hammer set teeth.

I never thought much about how setting last would effect the raker height relative to the teeth. I worry more about filing past the "dot" since I can't glue that metal back on.
Top

I do the same as PATCsawyer. I agree, if you don't sharpen into the "dot" you should not change the set your raker hieght. I can see where the teeth set could change that ratio, but it's so slight that it can't be measured. You could always check it agian, but do you really want to put pressure to your metal Anderson tool atop those nice sharp tips?
Top

I pretty much follow the order PATCSawyer lists. I sometimes skip 2a or do it as I am cleaning the saw in step 1.
Top

Found this on ArboristSite. Posted by Art Martin and describing the process he witnessed in logging camps. The whole thread is a pretty cool read.
http://www.arboristsite.com/chainsaw/4932.htm

There was yet another chapter in the continuing saga pertaining to the “old logging days” and this was the cross cut filing shack. Here the saw filers had their saw vises that were usually made out of two pieces of 2”X10” Douglas fir 7 feet long. The tops were curved to match the contour of the saw. They were also tapered along the faces to allow the filer to get the proper angle when filing by allowing him to get closer to the saw. There were usually five bolts that went through the vise about midway. These bolts would support the saw, by holding the saw to expose a large portion of the tooth to allow the filer to set it at a correct position. Since fallers and buckers weren’t experienced in the art of filing saws nor did they have the time, they would bring the company owned saws to the filing shack whenever the saw got dull. Of course, some filers were betters than others, so the men using the saws would try to have their favorite filer to do their saws.
The saws were first checked for any kinks that may have bent the saw by a dropped log or some other object. The saw was hung on a nail and a long straight edge was held against each side of the saw. The filer could easily see if there was daylight coming from under the straight edge. If he saw a kink, he would wet his finger with some saliva and scribe a reference mark where the kink was. He would then take the saw down and lay it on a heavy piece of flat metal and used a cross peen hammer to remove the kink. It took a lot of experience to master this step.
The filer would then put the saw in the vise, and he would “joint” the saw, making sure that all teeth were the same height along the curve of the saw. This was done with either a Gibbs or Atkins jointer that was 16” in length. The two ends had floating sled runners and the middle had a place for a 4” piece of file attached to it. As the jointer was slid across the arc of the saw teeth, the filer would take off only the tips of the highest teeth. The filer would do this several times until he saw that the file had touched each tooth. Now he had a perfect arc from which to start filing. If a person had lain one saw after another on a flat surface, end to end, the arc would have formed a circle of about 40 feet in diameter. So a 7-foot crosscut saw is actually a section of a large circle.
When the jointing was done, the filer would then work on the rakers. There were usually four cutting teeth and raker in the sequence on the saws used in the Redwood region. There was a large gullet on each side of the raker to allow the chip to be curled up inside it and brought out of the cut with the back and forth motion. These rakers were swagged to form a slight chisel to remove the chip that had been severed by the longer teeth. These rakers were set about .025” below the teeth with a gauge made for that purpose. It is something like a depth gauge for a chain saw chain. Once the rakers were lowered and swagged, the filer would file the teeth to a very sharp point. Once all the teeth were filed, then a set was put in them. This process was done by using an anvil held against the back of the tooth and hitting the front of the tooth about ¼” down from the point to bend the tooth over about .012”. There is a small, four-legged measuring devise called a “spider.” It has one leg .012” shorter than the other three. Some of the spiders were .012” and .015” and so more set could be put in, depending on what the person, who used it, preferred. On a flat surface it “rocked.” This spider was held at the top of the tooth with the other two legs supported by the neighboring teeth. When the shorter leg, was held against the top side of the sharpened point and when it no longer rocked, that tooth was done so the filer would skip a tooth and repeat the process on that tooth and so forth until the entire side was done. Then he would turn the saw around and do the other side the same way. Every other tooth is set one way and every other tooth is set the other way. Then the saw was then ready for the fallers and buckers to use for the next week or so. The filer spent about three to four hours to do a saw.
That is a day at the filing shack.

I will occasionally swage the rakers some before jointing, specially if they haven't been done before, just so I have some "built in" swaging after jointing. Then swage and pin gauge them a final time after jointing.
Top

SalmonCreek wroteCOLONI will occasionally swage the rakers some before jointing, specially if they haven't been done before, just so I have some "built in" swaging after jointing. Then swage and pin gauge them a final time after jointing.

I find myself doing that with most Ebay saws, as they usually arrive way dull or with chipped/blunted teeth. I'm going to lower all those teeth to a common in the jointing process anyway, so I might as well get a good swage started on the rakers.
Top

Going back to an earlier part of this discussion, I would like to hear an argument for pointing up the teeth before setting them. I learned to set first, then point, and considering the alternative, it frightens me to think of hammer setting the teeth i just meticulously sharpened. Thanks!
Top

Crosscut Sawyer wroteCOLONGoing back to an earlier part of this discussion, I would like to hear an argument for pointing up the teeth before setting them. I learned to set first, then point, and considering the alternative, it frightens me to think of hammer setting the teeth i just meticulously sharpened. Thanks!

I'm with you. After damaging the edges on a few freshly sharpened teeth, I switched to setting after I joint. Especially on some of the perf lance saws where the teeth are so close together, it's really easy to hit the adjacent teeth when setting.

As long as you don't over file and take off the tip, I don't see a good reason to set last other than it might be slightly easier since there would be less metal. (?)
Top

Perhaps because I'm careful with back honing the burrs off a finished tip before setting, I prefer to leave the setting for last. If I hammered in the set then filed a burr over the back side of the tip, I would not have an accurately measurable set and might have to hammer some more anyway. Tooth on the right shows the filing burr clinging to the back side of a tooth. 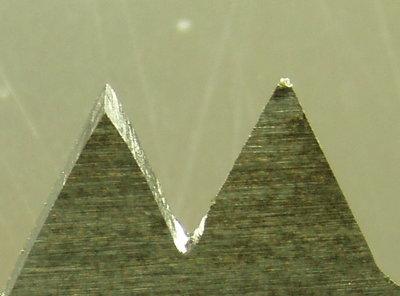 I don't recall ever damaging a sharpened tooth while hammer setting, though I have nicked a few raker tips swaging wide of the mark. I picked up an Atkins setting hammer on Ebay that the previous owner had modified by coning one face to a smaller diameter. He probably did this to remove chips on the edge of the hammer's face, as the other side was chipped, but the result was a smaller striking face. I use this hammer when doing small saws. Not a face I'd use for swaging rakers though. 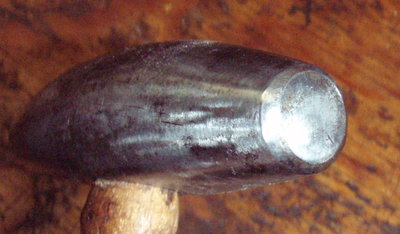