Yet another raker question?

Yet another raker question?

It seams when I am swaging rakes that the first initial moment of the raker tip is fairly quick. After that the swaging to the pin takes a lot of hammering. This is also when I (still learning) try to force the metal farther than it seem to want to go I find that the raker tips will sometimes brake. Swaging to .009 slope file to .012.

The raker tip also will have the right shape of swage before getting to the pin.

does anyone file say .003 +- off the raker height before final shape up and swaging?

I would think if you were setting the raker hight .020+- below like some west coast saws, if you swaged all that you would have a crazy hook.

What model saw are you filing? Some saws are highly tempered and resist the hammer.

That first bend comes quickly because the raker tip is thin near the tip. Cutting a couple thou off the top of your rakers before swaging is better than breaking them but before doing that, how deep are you cutting your V-notch? The deeper the V the steeper the slope going down from the raker tip. That steep V gives you a more swageable raker. Hot swaging is another way to move metal while it's softer, but you can overdo that propane if not careful. Also, as you hammer your raker you will work harden the spot where the hammer is striking it. That spot will take on a little shine as the smooth hammer face crushes the score marks made by your file. By filing CAREFULLY at that shiny spot and just below it, you will thin the raker curve a bit and it should move under the hammer. If not careful though, you can remove too much metal and create a thin weak raker.
Top

Thanks again for your guys time.

The saw is a super pitted Simonds #22 I took it on as a challange and was made to be short compact saw that fit easily in my canoe. I cut it down from 5.5' to 55 inches.
This is the second time I have sharpened this saw. First time with with and Anderson Raker gauge.

I have no doubt that the pitting is slightly responsible for the severed raker tips. All three tips broke were on two rakers right next to each other at one end of the saw.

These are two different rakers on the same saw. (forgot to take the pics of the same one)

I tempered the rakers and as you can see the saw is very pitted. 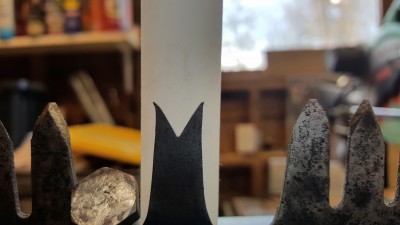 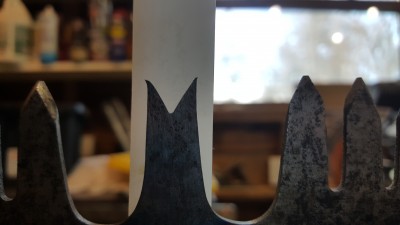 If I plan to re-temper Rakers. I save that for when I swage the Rakers. It's easy to move the tips of Rakers when the steel is warm. practice holding your propane torch and hammering at the same time. polish, brighten the tooth before, so you can watch the oxidizing color and try to keep under 500 degrees. Anything over 650 will soften the steel. 650 degrees is where to steel will start to show a very dull red only in a unlighted room. careful when you find heat treating color charts, as some are for tool steal and some for saw steel. The colors are a little different. I use Templaque heat sensitive paint to accurately assess the temperature.
John
Top
BUTTON_POST_REPLY
5 posts • Page 1 of 1