I've was reshaping the teeth on one of my crown-tooth (GT American) saws recently. I'd assumed, initially, that the mini-gullets between the teeth would be spaced at 1/4 - 1/2 - 1/4 of the width of the crown. But looking at some of my less used saws, it appears that the two outside teeth commonly have roots wider than 1/4 of the whole crown. Presumably, this is to make them stronger? If I file all three teeth to the bottom of the mini-gullet then the two outside teeth will be at a (very) slightly shallower angle than the central tooth. This is probably what I shall do and I doubt that it will make a noticeable difference, but I'd be interested to know if anyone has any thoughts on this?
Top

Re: tooth spacings on crown-tooth saws?

I've always filed the saw like the Disston Lumbermans Handbook suggests. PATCsawyer started a thread on the Great American saw which has some good info in it. https://www.crosscutsawyer.com/viewtopi ... =10&t=1252
Posted photo from Lumbermans Handbook
When filing M-Tooth the outside Rake angle of the tooth is best to be a Negative angle. If it has a positive Hook angle, the tooth will get a narrower width as the tooth is filed, the gullets will get enlarged.
John 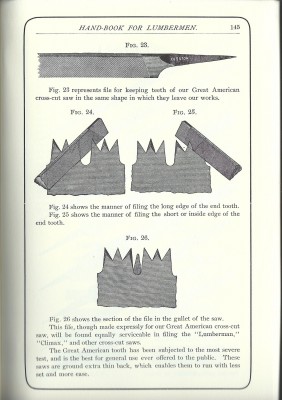