How does one get one of these treasures?
Top

Dolly and I will test the first prototypes in March. If we are satisfied with the results, I'll make a few dozen. I'll post on For Sale Forum when ready.
Top

'Brian,
It is kind of what ever works for you. Most vintage saw vises were set too high to strike a raker from above.

Thanks, Jim, that sounds sensible. I must admit that I've been a bit on tip-toe to do my swaging. My vice is a portable, three-legged thing which is probably a bit lower than most people's.
Brian.
Top

This may be going too far back to basics, but doesn't it depend how you swing the hammer? If nailing chest high and higher, one uses an overhand swing. For lower nails, you either need to crouch or do a backhanded swing. For the first, the handle is below the nail, for the backhand swing the handle is above the nail.

For swaging, the hammer can be used overhand or backhand. The backhand swing follows the swept back of setting hammers with regard to hitting the other raker tooth. In this case the handle is above. The overhand swing has the handle below and leads to the mark on the underside of the hammer.
Top

underbucker wroteCOLON[Jim,
Interesting. When Dolly first spoke to me about reproducing the Atkins #4, the first change she asked for was more clearance under the swaging face. Here is a front view rendering of what I am working on.
The attachment Hammer - Front.png is no longer available
The face is still circular, but I have shaped the bottom of the head much flatter than the original.
I will have prototypes in about three weeks. I can bring one up if you are interested in previewing and critiquing.

Underbucker,
It will be interesting to see your prototype and give it a try!
A similar design is shown in the 1919 Simonds catalog..... but I have never seen one.
attachment=0]Scan0004.jpg[/attachment]
The 1919 price would be very attractive! 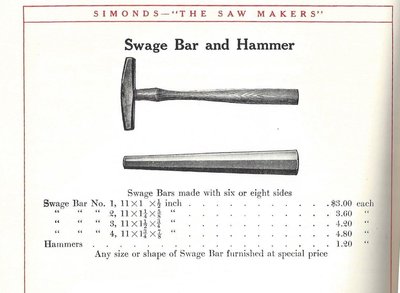 You are right. The design we came up with is like a hybrid of the Atkins #4 and the Simonds swaging hammer. The cross-section is like Atkins but we have flattened out the bottom and added "cheeks" at 5 o'clock and 7 o'clock like the Simonds. This should provide better clearance and a better sight line when swaging in the traditional manner.

One of our local libraries has a 3D printer so I was able to make a prototype in plastic and send it down to Dolly for early review. Should have tool steel prototypes in 2-3 weeks.
Top

I've tried all the different name brands hammers and found I like the Disston best. Although it doesn't have a makers mark on the hammer. It came with a collection of Disston tools and other hammers that are marked, which I got from a collector. It has a good balance and weight to it. I hammer over the saw with the handle down for one side of the tooth and handle up for the opposite Raker tip. In the photo showing all the hammers, the first on left is the Atkins, then the Disston, and next are the Simonds #333. The Simonds are different vintage or made in different shops, as they have a little shape and weight difference, also different size letters stamped into the heads. The swage bars are a #1 and a #3 size.
Second photo is of one of the Simonds #333 hammers that has a lot of wear on the underside from hitting The other Raker tooth? and it has one face that is concave. The concave face looks as though it has the most use and might have been ground that way by the Filer using it.
John 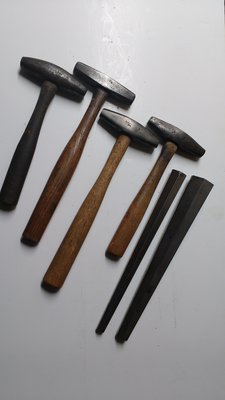 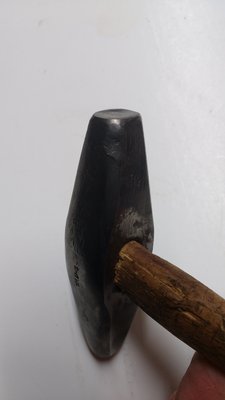 Simonds #333 with concave face and wear under the face

Swage bars? Good grief, something else for me to dive into. Got an explanation on what a bar is used for, since I am so dense and lazy to research it myself. Honestly, this is the first time I've seen one and I ain't got a clue what it's purpose might be.
Top

dayle1960 wroteCOLONSwage bars? Good grief, something else for me to dive into. Got an explanation on what a bar is used for, since I am so dense and lazy to research it myself. Honestly, this is the first time I've seen one and I ain't got a clue what it's purpose might be.

Disston says that the swage bar is for use on circular and gang saws. I guess that you could use it on a crosscut saw for swaging too. Some filers use a bar rather then hammering directly on the raker tooth.

Maybe John can say exactly how he would use it. 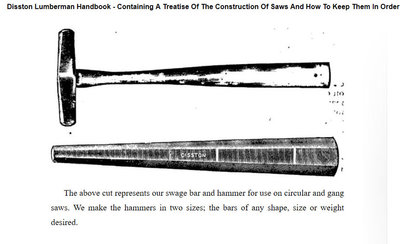 I have a hard time hitting a raker tip consistently with a hammer, so I use a 1/2" grade 8 bolt as a swage bar. Gets the job done and I never miss. 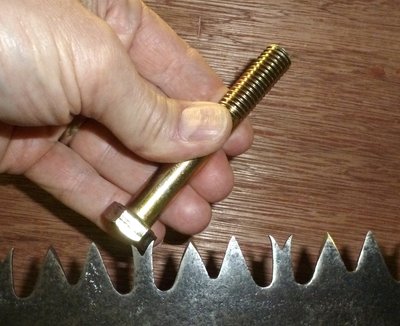