Local Machinery Supply has new Nicholson Cantsaw files made in the USA. Anybody need one?
Top

No thanks, I've got one.

But I want to talk about cantsaw files and since you started a topic with that name, I'll resurrect it. This is the only thread that showed up when I searched for cantsaw files on the site. Perhaps I should search for cant saw as two separate words. But the file I have is labeled cantsaw as one word. It's a made in USA Nicholson which I picked up somewhere over the past few years, perhaps a flea market or estate sale. I also picked up a new (to me) perforated lance tooth saw last fall. I got the rust off it, oiled it, and hung it in my garage. Last weekend I finally got around sharpening it. I'd never used a cantsaw file before, so I decided to try it out. This is only the third saw I've sharpened. The first two I think I sharpened with just a mill file and perhaps a chainsaw file for deepening gullets.

After jointing the teeth I tried several different approaches to filing and finally came up with the following system: 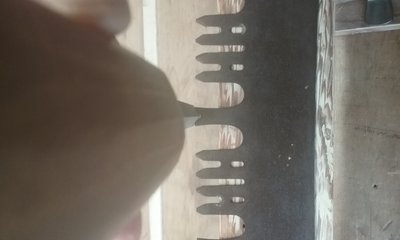 filing a raker with a cantsaw file

For the cutters I filed them with the broad face of the cantsaw file. But I held the file so that the top narrow face was horizontal and filed straight away from the tooth. This was an easy file orientation for me to maintain for every tooth and I feel like I got a more consistent shape to the teeth than my first two saws which I sharpened with mill files. Also, I did the whole saw with just one file. 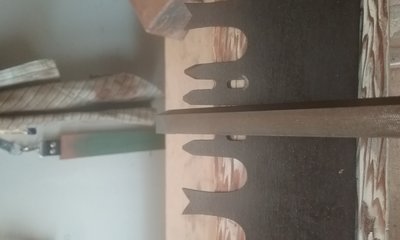 filing a cutter with a cantsaw file 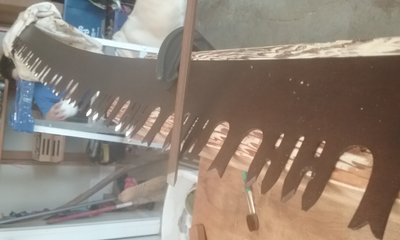 filing a cutter with a cantsaw file sideview

I'm not saying this is the "right" way to use a cantsaw file. The teeth end up with a fairly acute bevel angle (25 degrees for my benchtop saw stand) and a more obtuse point angle (around 65 degrees) than what Leonard Lee suggests in "The Complete Guide to Sharpening" or what I see on some of the experienced saw filer's posts here (Jim_Thode, PATCsawyer, and others). 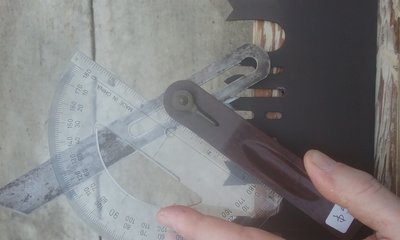 I actually spent several minutes trying to measure the bevel angle on the cutters and it came out to be 25 degrees. Then I realized of course it was 25 degrees because that's how I made my fixed benchtop saw stand angle. 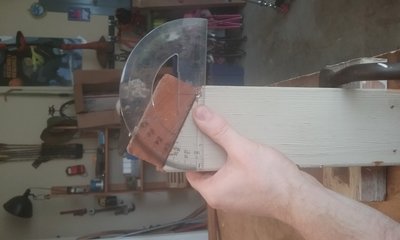 I haven't actually used this saw yet, although I hope to on a trail bridge building project this spring, so I don't know how well it cuts. But I found this method of using a cantsaw file helped me keep my angles consistent over the whole saw.

My question is, how do ya'll use cantsaw files?
Top

Nice job on your jigs and filing the cutters; the cutters need to be the same height and have the same set and be 'pointy.' If they aren't pointy, you'll see little fibers on the side of the kerf.

Your raker tips could be more acute, something that is better achieved with the triangular file. With a triangular file the raker end will have a 30 degree angle, much more acute than what your photo shows which looks to be more than 45 degrees. By bending over the tips of the 30 degree rakers (many examples elsewhere on this site) the rakers act like little chisels and do a great job of cleaning out the kerf. Since standard chisels have a 25 to 30 degree angle, it is fairly easy to swage or bend the tips of the 30 degree rakers over to make the little chisels to clean out the kerf. It is certainly possible to clean out the kerf with straight-sided rakers, the saw just doesn't run as easily and the wood comes out as chips or sawdust rather than ribbons or noodles.

I use a cant file, mill file or triangular file on cutters but not on rakers. Hope this helps.
Top

I used cantsaw files a few times in my early days of saw filing because that's what I had. Been a long time since I used one. Mostly I use dedicated crosscut saw files (teardrop shape) or mill files. I stumbled upon a local hardware store that was going out of business a few years ago and the new owner had a shelf of NOS saw files he wanted to get rid of. I bought them all and am set for life, possibly even the afterlife.
Top
BUTTON_POST_REPLY
4 posts • Page 1 of 1