It's requiring more downward pressure as it wears because your technique creates a profile that is more blunt than either the traditional technique or mine. And your long knife edge greatly exacerbates this, requiring even more pressure.

1) joint the saw
2) file traditionally until the tip is small dot
3) create trapezoid face:
3a) hold the file more parallel to the saw plate than the ridge
3b) file only enough for the small dot to become an edge

If a newly sharpened traditional tip is 1/256" wide, then a 1/32" long knife edge is, say, 8 times more durable, and the cutting edges at the tip can be tuned up multiple times without changing the length of the cutter. 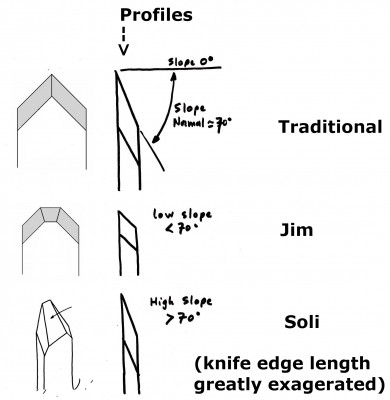 Your experience makes sense to me. The shorter the knife edge is, the more it would preform as a normal pointed cutter. The slope angle on mine were right at 70° so the only real difference between your method and the one I tried was the length of the knife edge. With my knife edge being much longer it would make sense they would wear much slower. However my test did not support that idea.

Maybe you could do a side by side two saw test like I did and see how the much shorter knife edge stacks up. Is there some sweet spot? 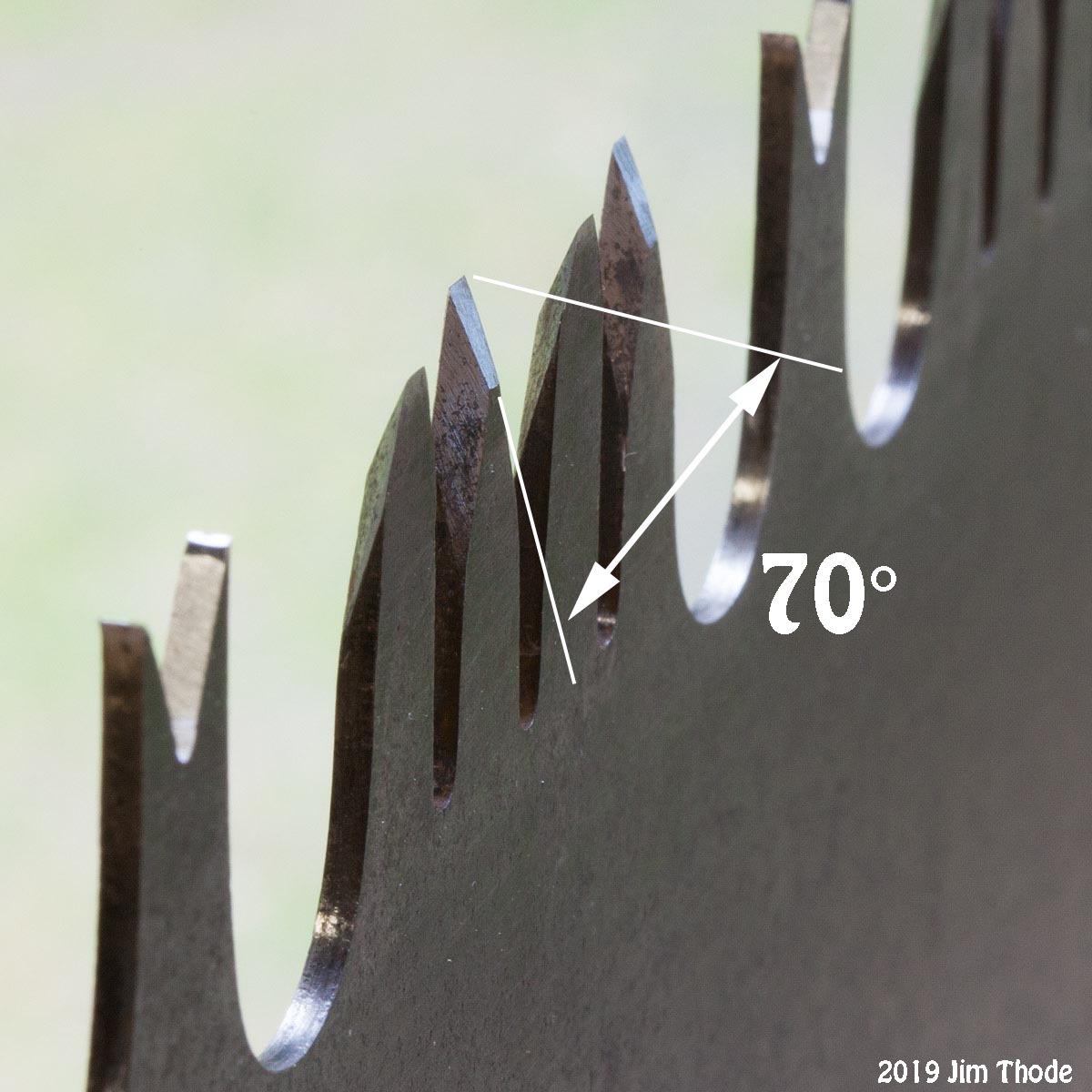 I totally understand your [explicatives] frustration. I've had the same happen to myself a couple times. Sooooo, I now put everything in a word document file, and then copy and paste it into the post. Continue your great posts. We are all learning from them.
John
Top

Here is another little variation in filing cutter teeth. This is on Arden Corey's 520 competition saw. The idea was that it would cause less drag as the tooth moved along. He did not really know if it made any difference or not.

The photos are of teeth from a Simonds 513 that came from a closed logging outfit in the Pacific Northwest. The last photo is of an invoice that supposedly was attached to the saw indicating 8 hours of filing (dated 1946!). What caught my eye was the unusual filing technique used on two of the teeth. This is similar to the inverse filing technique Jim describes here. Assuming the history of the saw is true, I figured this technique must be well established and worth emulating. Based on the above field tested information, I think I’ll stick to traditional filing. Thanks Jim! 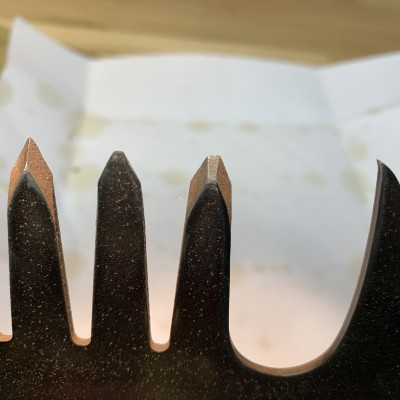 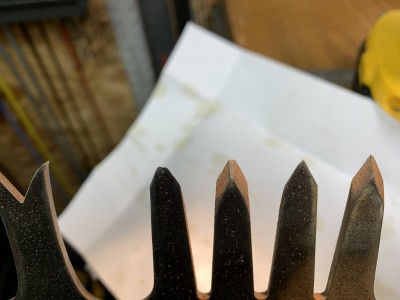 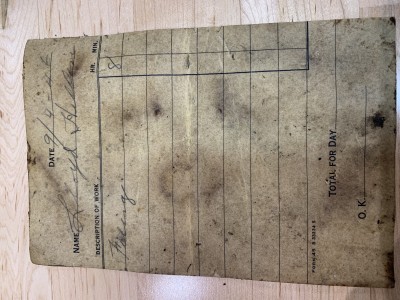 Trilliumrock,
Was there more then one set of the flat tipped cutters on the saw? With ones in the photo looking to be much shorter then the adjacent pointed cutters I wonder if the flat tipped ones were just dressed up cutters that the tip has been broke off.

Hi Jim. You are correct. The teeth in question are considerably shorter than the adjacent teeth (I hadn’t noticed this). The saw was 9 feet in length and there were no other flat tipped cutters. Supports your theory that these were dressed up cutters that the tips had broken off. Cheers!

Many of the rakers were higher than the cutters. It makes no sense! Bob
Top

I often see saws with the rakers much higher then they should be and believe there are two reasons for that.
1. The cutters dull and wear down much faster then the rakers. At least for swaged raker, they wear very little and seem to be self sharpening https://pbase.com/jimthode/image/166900612.

2. Inexperienced files (saw owners) sometimes only sharpen the dull cutters when they really should do a full joint, raker fitting and cutter sharpening.

Sometimes I wonder if saws that we find at flea markets were actually used for productive work back in the day. My $13 Royal Chinook falls into that category. This 42" cut off falling saw looked pretty bad but there was a good saw in there someplace. It was straight, no broken or missing teeth, had full length teeth with light rust. I could tell right off that it was quite stiff and and after measuring the teeth thickness of 0.102" and back thickness of 0.066" it likely identified the saw as a Royal Chinook. Good saw but if it was ever used as it was sharpened is the question. It had a relatively uniform set on the cutters of 0.090", yes I wrote ninety thousandths! If that was not bad enough, all the rakers were constantly 0.100" longer then the cutters, and yes I wrote 0.100" longer, not shorter then the cutters!

Did it cut like that? Yes, I did try it as found and I managed to get about 3" into a punky log before giving up. The good thing is that there was no chance of binding, as the kerf was about 3/8" wide. Anyway, I cleaned it up and sharpened with a set of 0.008" and rakers set 0.015" below the cutters. It cuts fine and as a small user saw it should last for decades to come. Another tool saved.
See: https://pbase.com/jimthode/flea_market_saw2015

Hi Jim. I am intrigued that a saw with rakers above the cutters would function at all. I assumed such a saw would bind up and at best tear and rip out wood fibers with need for excessive energy to work and control the saw.

That is a good looking saw that you brought back to life! I am pleased to know that such a small set is working well. I have been afraid to go less than 0.012” on the set even on a taper ground felling saw. Must give it a try!
Top
BUTTON_POST_REPLY
30 posts