an inch off a green maple round

an inch off a green maple round

The round is about 42" diameter, pretty green, felled 6 months ago, not much checking. It's has four piths and some ingrown bark. Big leaf maple, which is soft. Some growth rings are 1/2".

I'd like to crosscut a disc off the end. Any tips on keeping a uniform thickness?
Top

Make sure that you and your bucking partner pull straight. Your partner will have a better eye for your pull stroke than you will and vice-versa. A lot of sawyers tend to pull the saw toward their bodies on that back stroke.
Top

I can think of a few ideas but first it should be understood that the cut off disk will require some kind of chemical treatment to prevent cracking after it is cut.

As said above, two sayers are good to keep an eye on running the saw straight.

Other ideas:
Cut the section a little over sized and machine to final thickness with a router and framework.

Mark the intended cut line all the way around the perimeter so you have a guide to follow. Maybe masking tape would work.

If single bucking the saw will tend to cut a little to the left, so alternating sides may be needed and you can also use this anomaly to make adjustment if needed throughout the cut. You could likely use this effect if double bucking to make adjustments also. The saw will tend to the left with more down pressure is on the push stroke (as in single bucking) and tend to cut to the right if there is more down pressure on the pull stroke.

Use the widest saw plate possible; cut it thicker than 1"; anticipate drying effects. To slow the drying, I use kraft paper or plastic bags. Depending on the type of maple, sapwood changes a bunch. If it doesn't split after a couple weeks of slow drying, use a jointer plane to flatten and be patient to let the wood find its new shape.
Top

Thanks for the tips. Here it is. Measures 42" in the two major directions. The thin lip is exactly 2" thick.

Only 27 growth rings, counted from outer to inner, so tree was maybe 30 years old.

It was under plastic from when we had it felled by a tree company in October until February. March and April its been exposed to the weather, lots of 45F rain, almost daily, but little direct sun. The face has been hosed off uniformly, the color variations are natural. The growth rings in the outer 2" are contiguous all the way around.

I've planed off most of their chainsaw rash with a 3-1/4" Makita power planer with carbide knives. The face is cupped, the center being low by about 1/2" plus the remaining rash.

Initially I was hoping to get two 1" cookies (to end up with two 1/2" to 3/4" cookies after finishing). One with a milled flat and polished face, the other with a raw crosscut face. But I'm chickening out, thinking I ought to play it safe and go for the one 2". Hopefully I can keep the crosscut face flat.

It's all I have left. Before I thought to do anything with the wood, I had gone and split the one round that was below (the tree branched very low). I'll be single bucking it with my 5' lance tooth that has a 7" belly, originally it was a 7 footer.

On second thought, I suppose I could go for 1-1/4" cookie first. It's volume would be about 1 cubic foot, about 35lbs dry, maybe 45lbs wet. That would remove something less than 1-1/2 at the 2" edge, leaving a 1/2 to 5/8" thick edge on the round. A second cookie could still be cut off the round, after milling the face flat. Maybe that's what I'll do.

Alternatively, I could cut tapered cookies, then mill to parallel surfaces.

Open to more ideas. I'm going back out now to position and stabilizing it for bucking. Noodles from a trial cut ... Finally got around to it this week. Procrastinated because I had ideas to make a saw frame to keep me honest against my indiscretions. In the end I just eye-balled it, singly, using my 5' broken 7 footer, and aimed at one disk, not two. But now I'm thinking pair of book matched disks might look kool on the wall. There is still enough to cut another disk, but it wouldn't be full thickness every where.

The cut came out pretty flat. I worried it might drift back towards the chainsawed face, so I aimed for a wedge, which is how it came out.

I think one of dynamics in bucking large diameter disks, as opposed to bucking in the middle of a trunk, is a bias from wedges. The disk side will bend outward like a potato chip, meaning the center line of the kerf is no longer vertical. This causes the saw to drift out of plumb, introducing a slight curve, with the disk ending up a bit concave, and the trunk a bit convex. The cut went so fast that I didn't process this until afterwards. I'll go out tomorrow to see if this occurred.
Top

We did something similar to this last summer on a dry, 2-ft maple burl. We used a saw with a wide plate and both double and single bucked. The burl had fibers with different orientations so that not all fibers were severed at right angles but we did manage a flat cut.

Then, we built a frame and flattened the face with a router which took out saw marks and some "wide kerf" effects attributed to the way the saw cut in the swirl of the wood fibers in the burl. 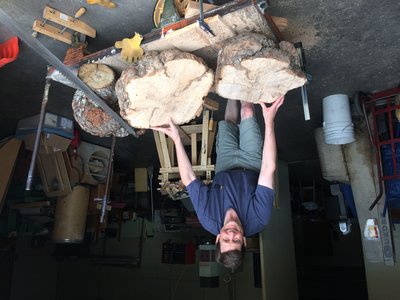 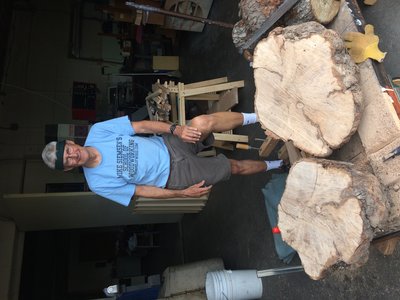 Sumnergeo, what did you end up doing with the burl?

I put some more time into this this past week. I've two 42" dia discs to work with now, as I ended up cutting a second cookie. One weighs 83 lbs, the other 60 lbs.

I cut the discs off 6 months ago, from a tree that had been felled by arborists 2 years ago.

They were in the unheated garage for months. Then some months ago I moved them into the piano room, where they'll end up eventually. I haven't taken any precautions to slow the drying, nor impregnate them with chemicals such as PEG.

There has been some warping over the 6 months, due to either drying or to alleviation of tensions (like when a plank is ripped), or both.

This past week I worked on the 60lb disc. I dressed both faces using a router and a retired 1/2" shank carbide dovetail bit that I had bought and used back in 1990 for sliding taper joints in 1" white oak. I also thinned the disc down. It is less tapered and is now about 35 lbs.

The disc still has enough structural integrity as to not need any special handling or additional support. Here is a cell-phone photo of the two, with the 83 pounder behind the dressed one. 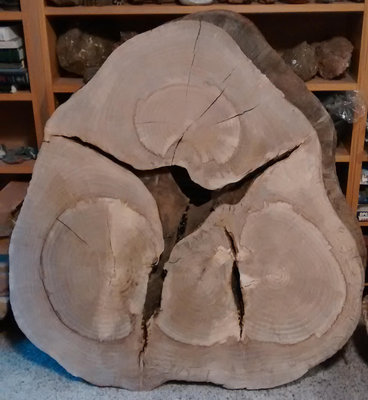 I made a few passes, alternating sides. The disc remained flat throughout the dressing process, but yesterday I put a straight edge to the disc and found new warping has occured. Since the disc is almost certainly at a stable moisture content due to the 18 months seasoning and 6 months drying, this week's new warping is almost certainly due to alleviated tensions.

I set up and leveled a couple saw horses on the driveway, placed two 7' 6x6's across them as an elbow-high 'table', then two 4x4's across the 6x6's to serve as rails for a jig. Here is a photo: 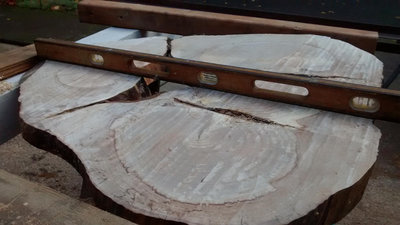 Like my other devices posted here (spider made out of plumber's tape, bent-file jointer) the jig was quick affair. A pair of 6' long angle irons from a bed frame. The irons are held roughly parallel and about 7" apart with scraps of 2x4 underneath at the ends, screwed through pre-existing holes, making kind of a picture frame. The irons form a long u-channel in which the router can slide left-right in the long direction. The router can also move perpendicularly, to/fro about 1", because the irons are spaced just close enough so that when the router is against one of the uprights, it has only about 1/4" bearing on the opposite iron. The jig lays on top of the two 4x4's. Neither the jig, the 4x4s or the 6x6s are secured in use.

What happened to the burl? Good question.

I'll try to get a photo. There was a steel frame built to hold the two halves. The wood faces were routed, sanded and finished and then a glass plate over them to make a coffee table.

Great idea. I'd be curious to know what router bit was used in the last pass to 'plane' the surface before switching to sanding.

I used a couple different bits with similar results to each other. Relative little 'internal' tear-out if I the router depth-of-cut was, say 1/2", but lots of internal tear-out if the depth was 1/16". By tear-out I mean that endgrain fibers in the middle of the disc compressed laterally. The wood is Big Leaf Maple, with large growth rings, about 1/2", so is soft, not at all dense or a 'hardwood maple'.

The tear-out hasn't been a concern so far as I was taking big cuts just hogging off wood to thin and true-up the disc. But in a couple months, after the discs relax some more, I'll be doing finer passes.

All bits were from my 'retired' collection (usable but somewhat dull) because I didn't want to ruin a nice bit if I happened to cut into a buried nail or rock, it being an urban tree. So I'll be ordering a new bit and would appreciate your recommendations.

Here are some more pics of my quick-n-dirty setup and the 83lb disc: 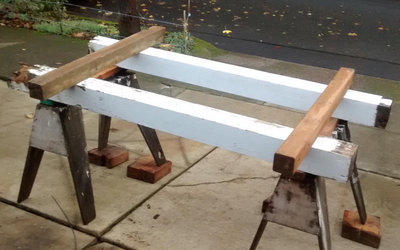 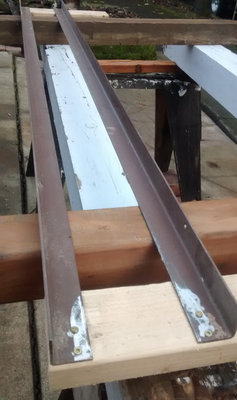 Width of sled relative to router base: 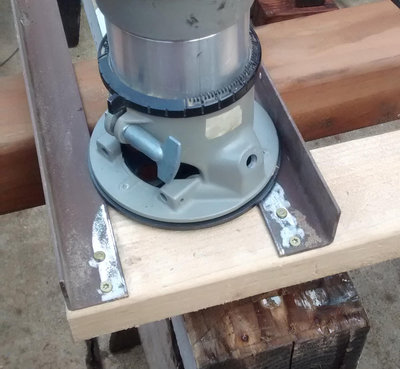 Surfacing off the arborist's chainsaw rash side of the 83 lb disc: 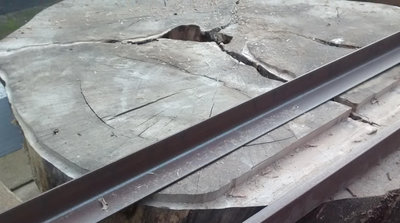