Topic should be types of Atkins saws, and posts are related to those saws
BUTTON_POST_REPLY
5 posts • Page 1 of 1

Has anyone seen or heard of a breakdown Atkins saw? My contractor brought a saw to show me and it was an Atkins #52 or 56 I believe. The saw breaks into three parts and is held together with cams and came witha canvas case. I haven't found it in any of the catalogs I have access to...mostly from the forum here.

I will try and get pics later if I can get the saw for a day or two.

Any help would be appreciated.

Thanks in advance.
Top

I have seen pictures of 3 piece saws. I believe they were mostly or all felling saws, made for smoke jumpers, so it was probably the Atkins Silver Steel 52. I haven't seen one in person, so I'm curious how flat the saw is when it is assembled. It looks like sliding metal tabs lock into each joint in 2 places.
Please post some pics, and let us know how it cuts if you can! Thanks Ned!
Top

Those show up on Ebay from time to time. Pricey, as you'd expect.
Top

I've looked at one a bit in the flesh but haven't run it. The fellow who owned the thing said it ran well as a two person saw, but had some issues running one-man. I don't recall it being a great deal thicker than other saws.
Josh
Top

Here are some pics of my Atkins 3 piece take-down. As far as I can tell its a standard no.52 that has the tongue and groove cam locks put in it. The saw is still Atkin's silver steel and segment ground. I've been told that very few were made, roughly 500, for the Forest Service Smokejumpers. The saw measures 54 inchs which kind of seems silly to three piece a four and a half foot saw. The cam lock is tongue and groove, which is quite a machining marvel. Only thing missing from my kit is the tool
that for rotating the locks into place but a pair of needle nose pliers work. The saw runs really well in wood but is definetly made to be ran two man. Only meant to be pulled as it tries to come apart if it buckles on the push stroke one man. 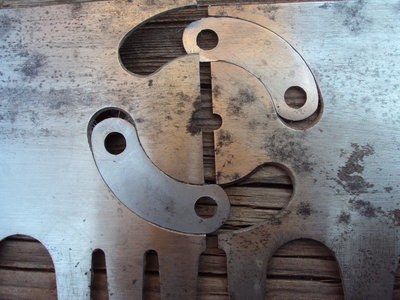 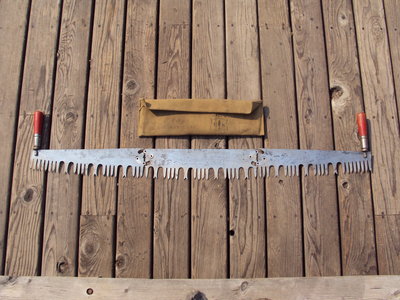 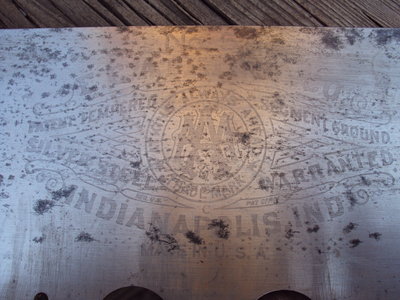